Shortly after the beginning of the strike, Frank Maguire, the Independent Republican MP for Fermanagh and South Tyrone, died suddenly of a heart attack, precipitating the April 1981 by-election.

The sudden vacancy in a seat with a nationalist majority of about five thousand was a valuable opportunity for Sands' supporters to unite the nationalist community behind their campaign. Pressure not to split the vote led other nationalist parties, notably the Social Democratic and Labour Party, to withdraw, and Sands was nominated on the label "Anti H-Block / Armagh Political Prisoner".  On March 30th, Sands was nominated as candidate for the Fermanagh and South Tyrone.

The next morning, day thirty-one, of his hunger-strike, he was visited by Owen Carron who acted as his election agent. Owen told of that first visit ‘Instead of meeting that young man of the poster with long hair and a fresh face, even at that time when Bobby wasn’t too bad he was radically changed. He was very thin and bony and his hair was cut short.’

After a highly polarised campaign, Sands narrowly won the seat on 9 April 1981, with 30,493 votes to 29,046 for the Ulster Unionist Party candidate Harry West—and also becoming the youngest MP at the time.

Bobby had no illusions with regard to his election victory. His reaction was not one of over-optimism. After the result was announced Owen visited Bobby. “He had already heard the result on the radio. He was in good form alright but he always used to keep saying, ‘In my position you can’t afford to be optimistic.’ In other words, he didn’t take it that because he’d won an election that his life would be saved. He thought that the Brits would need their pound of flesh. I think he was always working on the premise that he would have to die.” 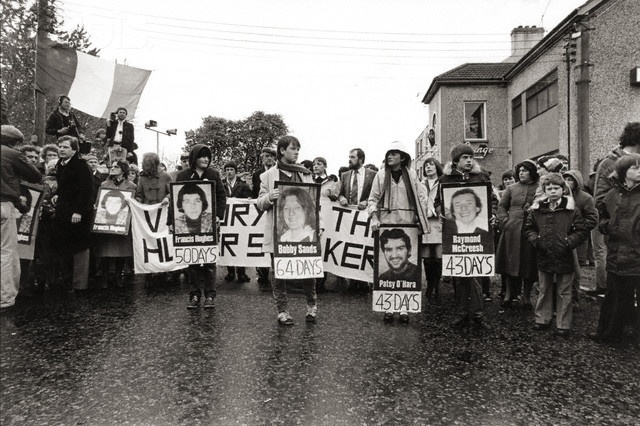 During the hunger strike by IRA members held in Maze Prison, there was violent rioting and demonstrations in the streets of Belfast. From corbisimages.com From left to right: Francis Hughes (strike from March 15 to May 12th, died after 59 days), Bobby Sands (strike from March 1 to May 5, died after 66 days); Patsy O'Hara and Raymond McCreesh (strike from March 22nd to May 21, both died after 61 days).
Remembering Bobby Sands. No content from this website belong to BOBYSANDSTRIBUTE[DOT]WEBBLY[DOT]COM or any of its maintainers. No profit is made with this site, it is for entertainment only. We do not claim any copyright on the images displayed here. Credit goes to their respective agencies and wonderful photographers. If any problems, please E-MAIL THE STAFF before taking any legal actions.